Relaxing after the art show

The 1 April Spring art show was sporadically attended, but I managed to sell a few items. I received many compliments on my work; lots of people took business cards, and some will probably visit my FAA galleries. Yea!

Time to play catch up on home and garden needs, and to embroil myself in creative projects.

With my first show of the season happening this Saturday, I'm up to my ears in work...no time to do photography. :-(
I have seven prints to frame; signage to update, decisions to make about how I'll set up.
This is the 33rd Annual Spring Art and Craft Show. It's a juried show, and this is my 15th year participating. I'm keyed up, and anxious, too.
Back to the frames!

My New Collection is Photography Abstracts 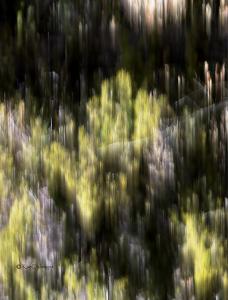 Although this collection is new, I have been seeing and photographing abstract images for a long time. The image with his post I call In the Forest. It started as a blurred image I took of tree branches, liking the green against the dark background. For a more abstract look, I turned the image 90 degrees and it took on a whole new look. So many natural and everyday items can be "abstracts" with out hardly any digital manipulation. It just depends on where you focus your camera lens.

Not Too Early for the Summer Calendar

Spring hasn't officially arrived, but I have already marked my Summer calendar for two art shows in which I'll participate. In July, the 3-day Depot Arts Festival in Livingston, Montana, and the 2-day August Lincoln Arts Festival in Lincoln, Montana.

Both shows are juried and the registration for each of these events ends in mid-May, and space is assigned by when you register, so the earlier the better.

This will be m fourth year in Livingston, and my third in Lincoln. Looking forward to them.

Is this Show Worth It?

It’s March and I’m looking ahead to the regional summer art shows and debating on in which to participate. In the past, my criteria have been distance from home, the revenue I made, and number of show days. This year I’m being more critical and examining the impact of the distance and days and entry fees against the returns.

I was surprised to find that a 2-day show 40 miles away (that’s 2 round trips) was more economical than the 1-day show in my hometown. My receipts were almost the same last year, but in previous years (and I keep those kind of records) the 2-day show had netted more.

My hometown show, a juried show that I’ve been in for more than a dozen years, will stay on my schedule, but I will do more local advertising to hopefully boost sales. I’ll also continue this new method of determining which show is worth the effort.

In February, 2012, a cat ran onto the soccer pitch at Anfield (England) during the Liverpool v. Tottenham match. It stopped play for nearly five minutes before one of the event people caught it and took it out of the stadium. Twenty minutes later, the TV announcer said that Cat already had a twitter account.

Sure, the fans have totally forgotten about Cat by now; I remember because it was so discouraging to me (I had opened my Twitter account not long before). Even now, I wish I could come up with something catchy and impressive that would go viral--if only for a few days.

I have posted images here at FAA for several years, and no matter how often I tell myself not to rush, I've done it again. I thought my original Digital Mountain Goat was just fine, but after getting critiques from several artist friends I realized it could be better...So I improved it! It is now reloaded.

I take satisfaction in presenting my work to other artist for comment. Their critiques help me see parts of my work I hadn't noticed before. While I don't automatically change my piece to meet their comments (which would be hard to do, since the comments are always unanimous), I get a better perception of what I'm trying to do and how it will be received by others.

With only a month until my first art show/sale of 2017, I'm pondering new techniques and materials. I think it's important to always present something new at shows, and at the first one of the year, that's what I intend.

My techniques haven't changed much. I am focusing more on digital arts than photography, although enhancement and augmentation of photo images comes under this broad tag of Digital Arts. Right now I'm considering different materials on which to print the images. I'll be prowling home improvement stores for something different; thrift shops and art stores, too. Printing on wood has become popular, but I want something with a definite texture.

This is important so when I send out postcards to previous buyers, I can entice them to visit the show with the lure of having something new and different. New items and styles also make a good header in a press release.

I have participated in the Big Sky Art and Craft sale for the last sixteen years. Reinventing myself and my products has always paid off.

How I Create a 2d Digital Sculpture 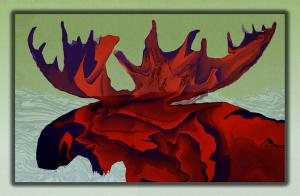 Someone suggested I make a video of me at work creating digital sculptures. Such a video would be so cut and spliced, it would look hokey. It takes me four, six, even more than a dozen times (over the course of several nonconsecutive days) before I get the image what I want. By definition, a digital sculpture is "the use of software that offers tools to push, pull, smooth, grab, pinch or otherwise manipulate a digital object as if it were made of a real-life substance such as clay." [from wikipedia]

Visualize this: I start with a shape and fill it with colors I think will work. This is my "clay." I then use a warp tool to push and pull the shape into the form I want. I have several programs that offer a warp brush. The one I prefer can be sized, both in diameter and in warping ability. This allows control of the bend and pull of the colors. I use a stylus on a tablet rather than the computer mouse, and this give me pressure-sensitive control. There are also preprogrammed warping selections (twirls, waves, bloating, pinching and more) that can be applied to all of various parts of the image. I occasionally use those for digital abstracts, too.

When creating Digital Critters I only use the warp brush to push and pull. I reference a photograph to keep the anatomical features fairly accurate. Once satisfied with the Critter sculpture, I layer it onto a background I have digitally painted, or a background of interesting textures.

I attended the local art critiquing group on Saturday. Quite rewarding. No photographers present, although one is represented in the gallery. But the water colorists, people working in oil and acrylics, pastels, plein air, and all studied items brought by others, giving comments and reactions.
I was in a photography club a few years back, but I don't recall that we critiqued as a group. We had lecturers, and information on darkroom or presentation. Once a month we did have a competition--just for fun. The judging was done by someone from outside the club with an art background. I really liked those sessions and hearing the comments about why something did or didn't work.
This Saturday group I attended reminded me more of the writer groups I've been in, where we have poets, journalists, fiction, nonfiction writers...The value of that diverse critiquing I found invaluable.
The Art group extended an invitation for me to bring something next month. I think I will. With my photAUgraphics, there are several works-in-progress that would benefit from it.